The start of sugaring is always an exciting time.  For the first time in several months we are able to get out into the woods without hats and mittens.  If the sun is out you can feel its warmth through your clothes.

Sugaring also happens pretty much at the same time as the mud, Vermont’s 5th season. 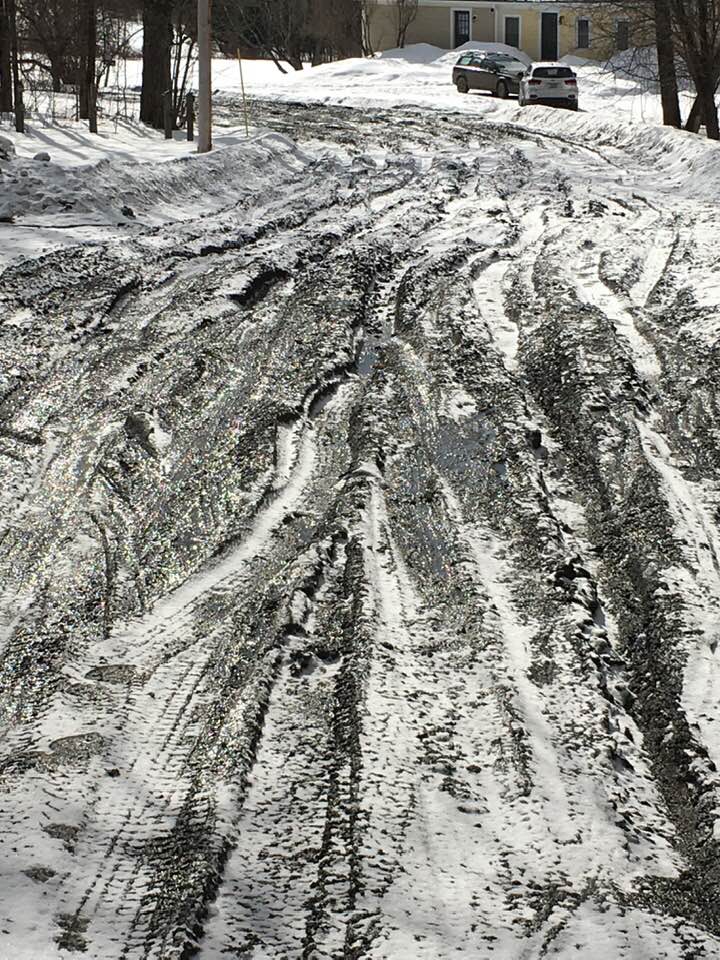 Mud gets on everything including those foolish enough to stick their heads out of  the truck window, and there is no point in cleaning it off anything until the roads dry out. 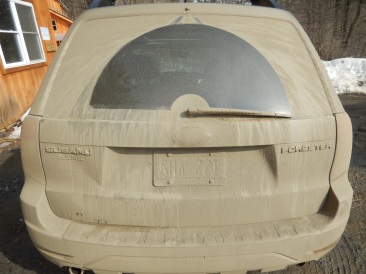 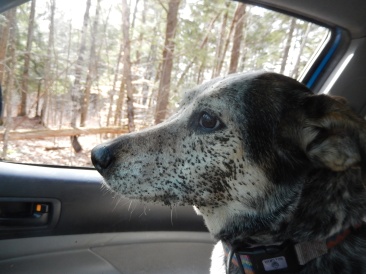 Despite the mud, there is a feeling that the worst part of the winter is over and that spring is not going to disappoint.

At Brookfield Bees sugaring usually starts during the first week of March when we tap the trees.  When using buckets, this requires drilling a 5/16 inch hole in the tree and driving in a metal or plastic spout .  We then hang a large metal bucket on the spout and put on a cover to keep out any debris.  These buckets need to be emptied every day after a sap flow. 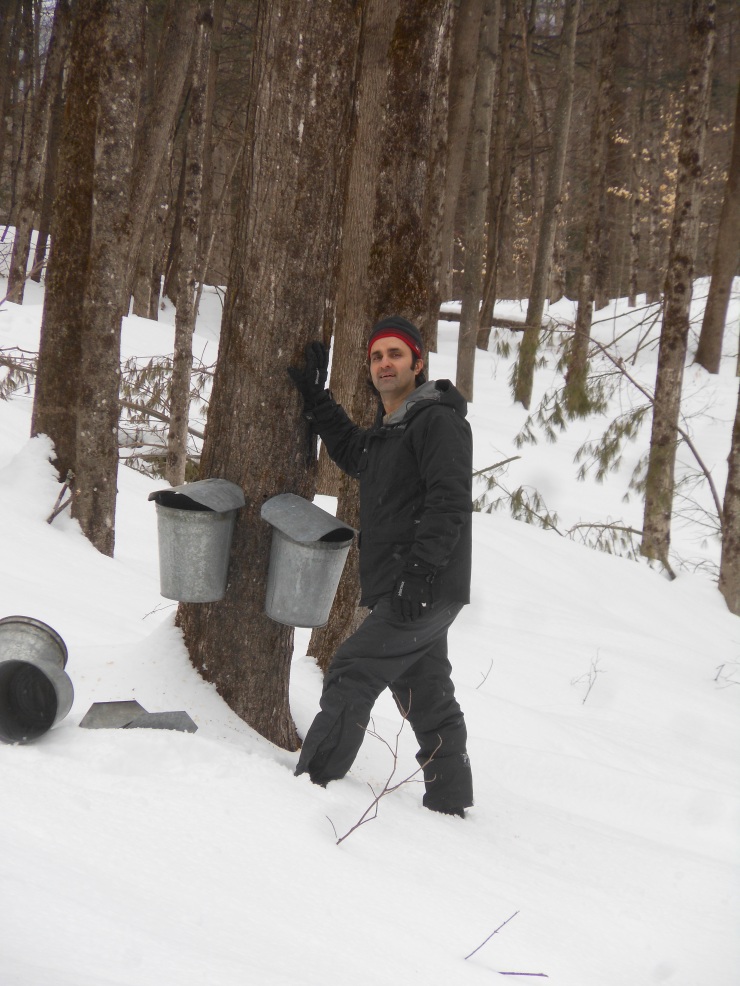 With tubing a plastic spout is again driven into a drilled hole.  Instead of a bucket plastic tubing is attached to the spout.  These tubing lines can have up to 10 spouts attached to them before they are attached to a larger “main line” that takes advantage of gravity to flow into the 600 gallon storage that is next to the sugarhouse.

In either case, the key determining factor in when to tap is the weather, as sap flow requires temperatures to swing above and below freezing.

When we first started sugaring at Brookfield Bees we collected all of our sap in buckets.  However, we have noticed that those buckets of sap have gotten heavier as we have aged.  Emptying 600 buckets every day is a lot of work, especially in deep snow. 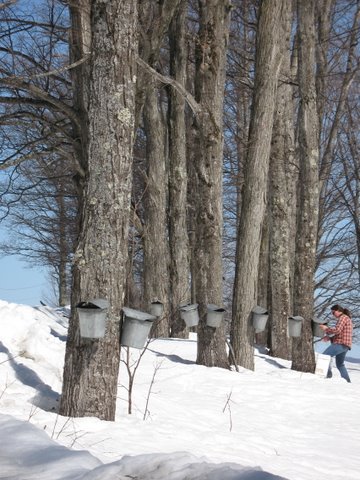 Whether there is snow or not, carrying two 5 gallon pails of sap to a collection station can be daunting, and lifting and pouring those buckets into a tank is best left to those with the strength to do so.

Collecting on the road is a bit easier, but it includes jumping up and down from the back of a truck.  When the 125 gallon truck tank is full we head back to the sugarhouse and pump the sap up into the storage tank.  On some days we collect over 1000 gallons of sap and have to store the excess sap in yet other tanks. 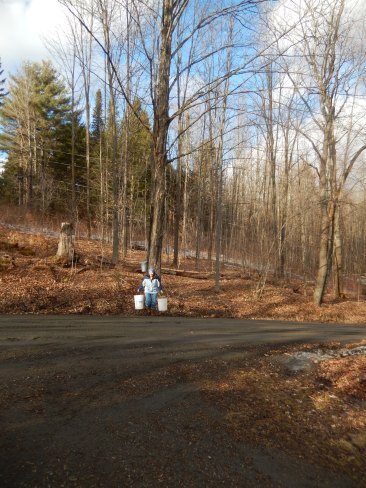 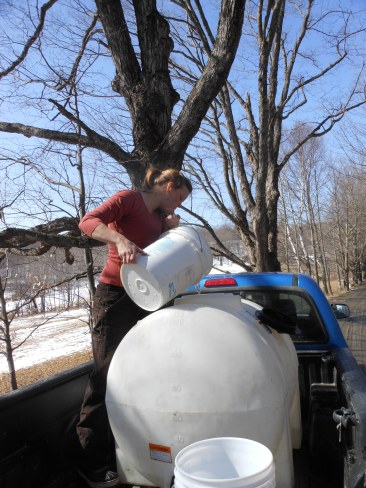 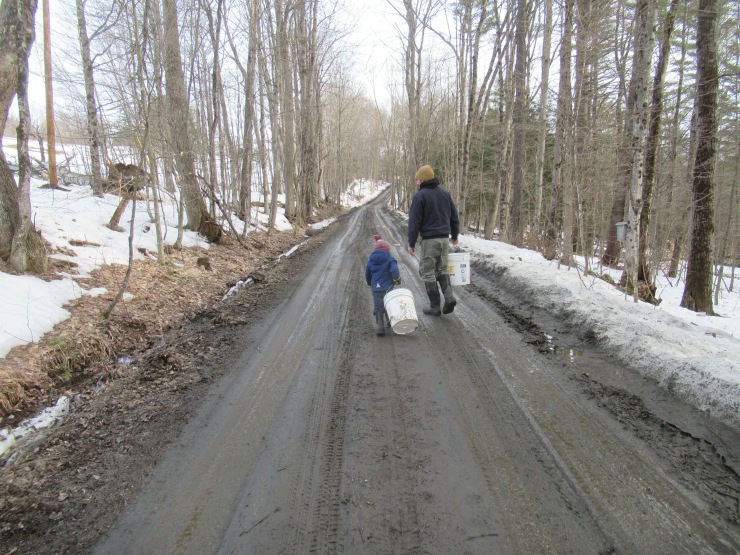 To compensate for our increasing age we have put more and more of our taps on tubing. We also bought an old snowmachine that makes tapping and collection a lot easier. 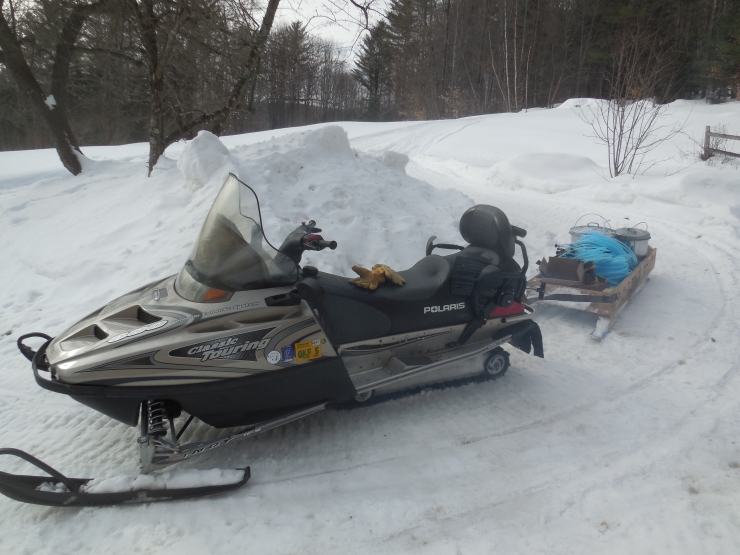 Even so, there are still many trees that we tap using buckets.  While tubing is definitely more efficient and uses less labor, you miss the tin drum symphony out in the woods caused by hundreds of taps dripping into hundreds of buckets.

The Vermont sugar maple is a very special tree.  When the temperatures start to rise above freezing during the day and then fall below freezing at night, usually in late February or early March, life within the tree starts to stir.  The sugars that have been stored in the roots and twigs of the canopy start to move up and down through the xylem of the tree.

When the temperatures are above freezing, the sap in the tree thaws and the pressure inside the tree rises above atmospheric pressure.  This pressure differential causes sap to flow from any holes or cuts in the tree. 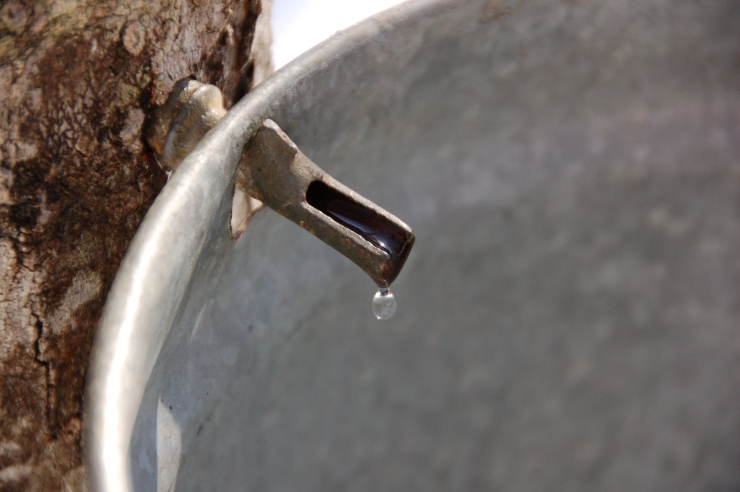 When the temperature then falls below freezing, the pressure in the tree drops below atmospheric pressure.  The tree takes advantage of this negative pressure to pull water in through its roots which becomes the sap that rises once the temperature rises above freezing.

What makes these pressure changes possible is the cellular makeup of the maple’s xylem, the structure of the tree that enables the flow of nutrients and sap.  Unlike most trees, the cells in the xylem of the maple are filled with carbon dioxide gas.  That gas dissolves in the sap when it is cold and then re-forms as a gas when it is warm, inreasing the pressure in the tree and forcing the sap out from any cut, such as a tap hole.

For those of us who sugar this presents an opportunity.  By drilling into the cambium layer of the tree, hammering in a spout and hanging a bucket we can take advantage of the up and down flow of sap.

The sugar content of the sap in our area is about 2%.  When it comes out of the trees it is the color and clarity of water.  Sometimes the flow is strong enough to fill buckets overnight. 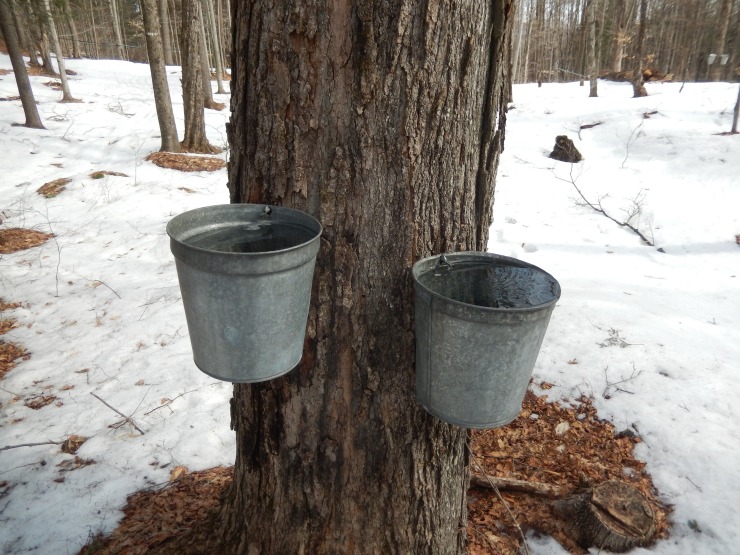 In order to make Pure Vermont Maple Syrup we need to raise that sugar content to 67%.  To accomplish this we put the sap in a large pan over a very hot fire and boil away. 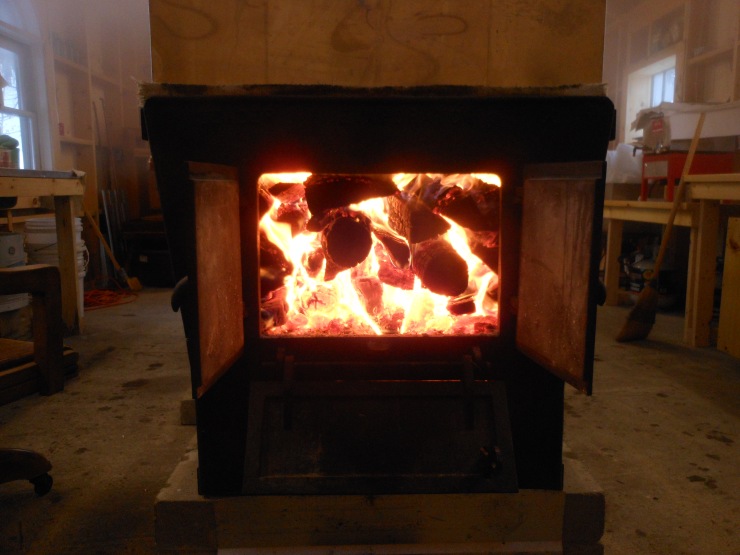 Our objective is to get rid of as much water as possible as quickly as possible.  Large ventilation panels at the top of the sugar house open up to allow the steam to escape. 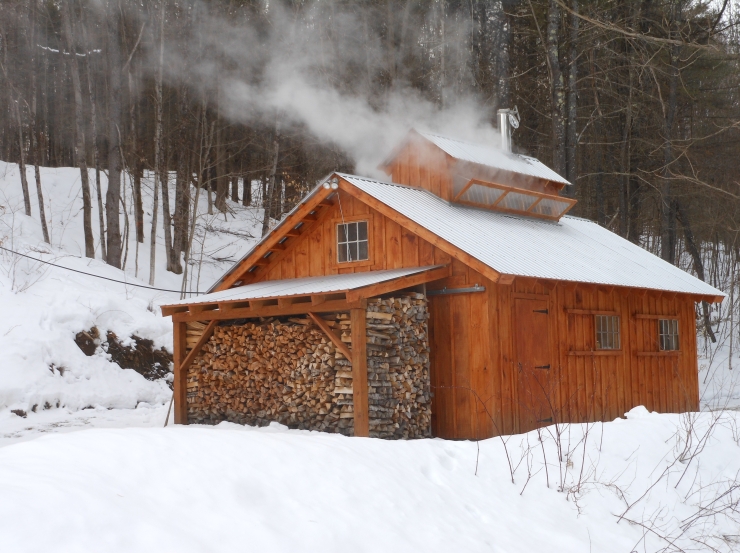 Despite this, there are times when it is difficult to see from the front to the back of the sugarhouse because of all the steam. 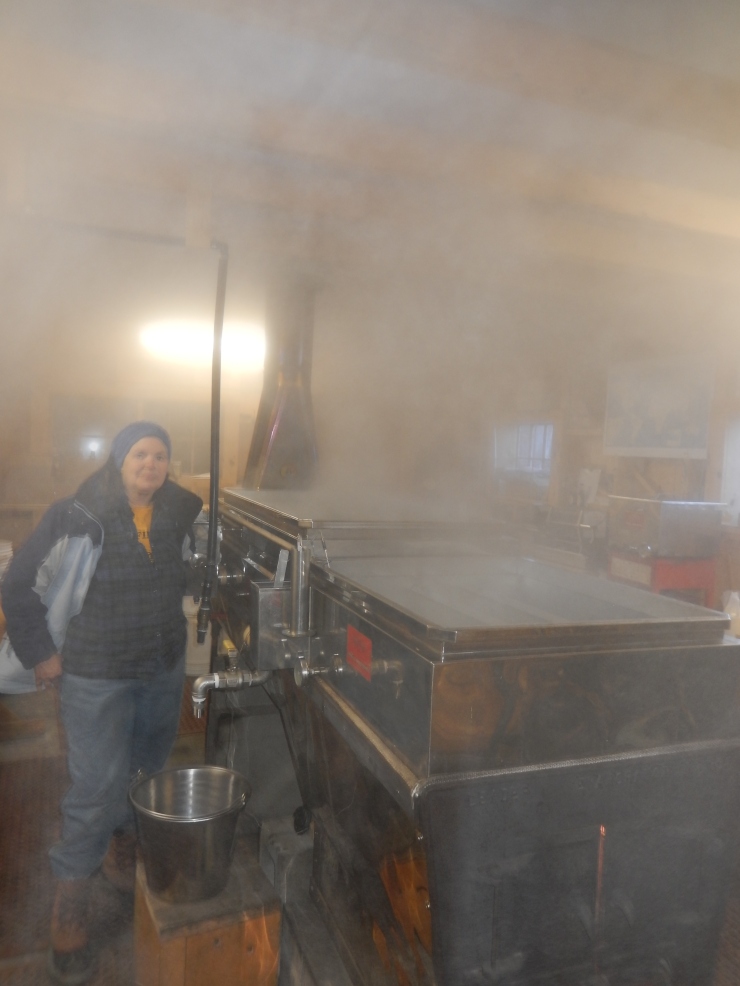 In our operation we can generate about 1 to 2 gallons of syrup per hour, depending on the sugar content of the sap.  However, at the beginning of the season, with new sap in the pans, it takes a day or two to get to syrup. 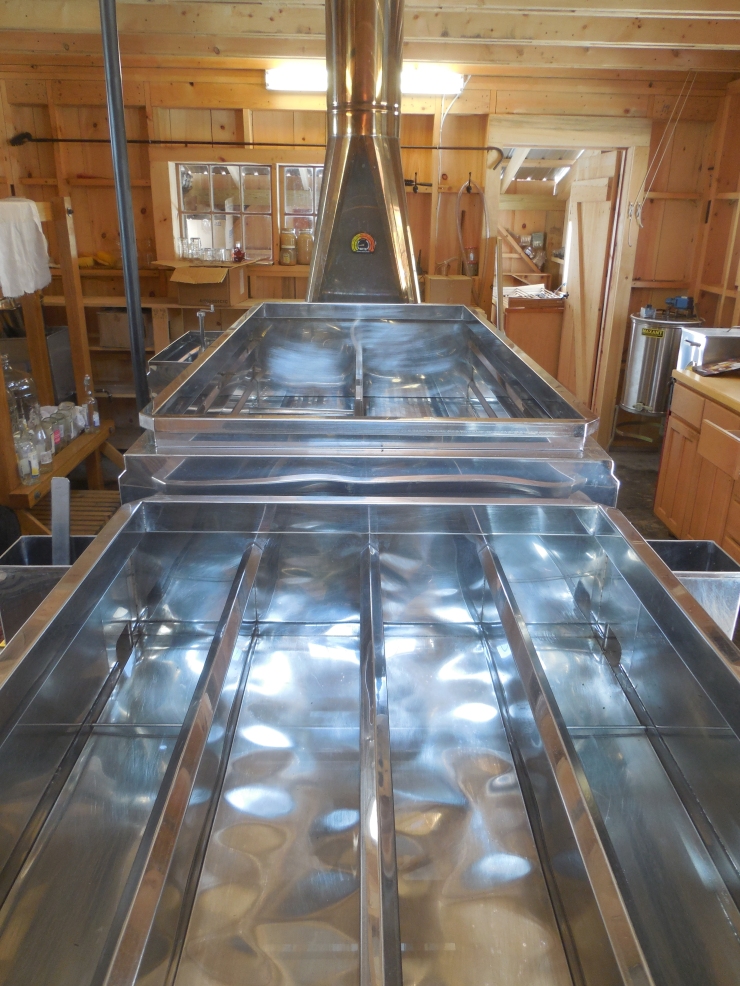 As the boiling sap wends its way though the channels of the pans, the density of the liquid increases with the heavier density liquid holding back the lighter.  At the end of the channels the sap, now at about 67% sugar, is drawn off into a stainless steel bucket. 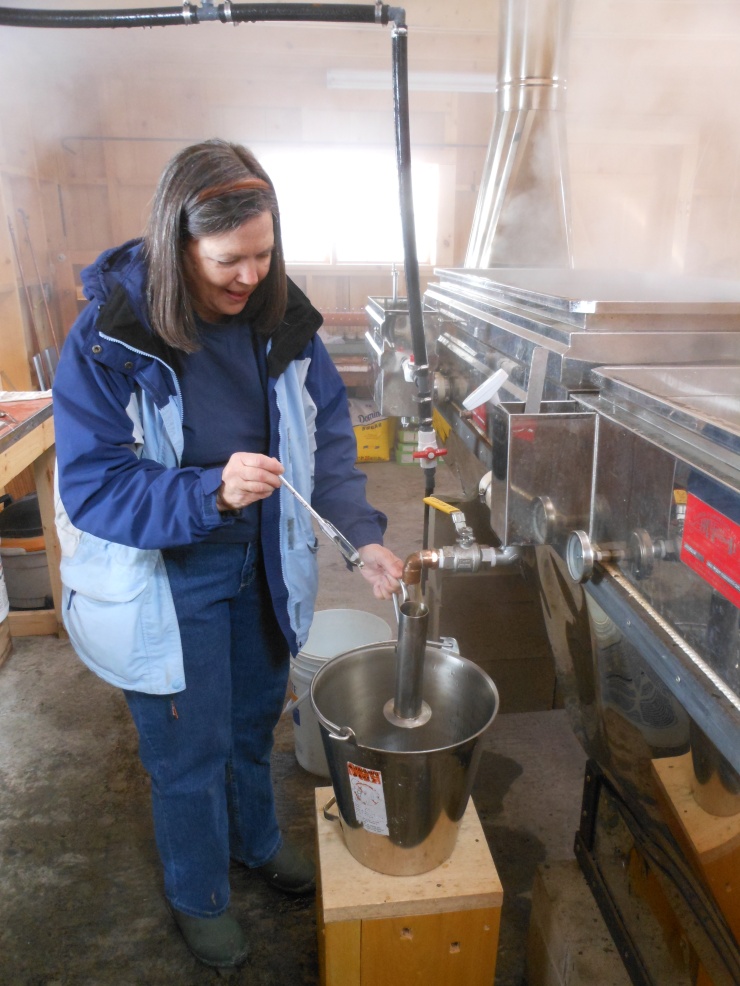 There are many tricks to knowing when we are getting close to syrup.  The size of the bubbles changes, the level of the boil changes, and the liquid in the pan will start to sheet off a scoop. 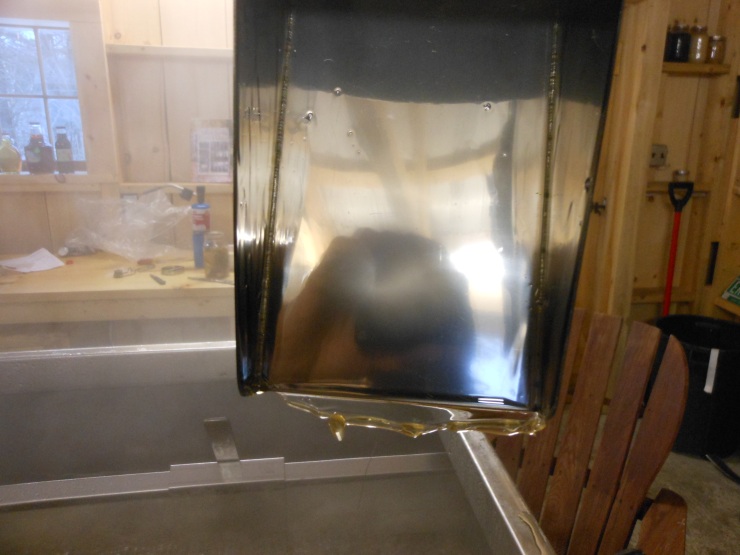 The most reliable way of knowing we are close is then the temperature of the boil is close to 7 degrees above the boiling point of water.

We take the bucket of drawn syrup over to a canning unit and over the course of an evening can fill it up to its 8 gallon capacity.  From there we run the syrup through a filter press to remove precipitated minerals which cause a cloudy appearance.  The newly-filtered syrup is then put into another canner where it is tested for sugar content using a hydometer and thermometer.  We usually take our syrup off the pan a little “heavy” which enables us to get to an exact 67% sugar by adding a small amount of water at this final stage.  When the sugar content is where we want it, we take a sample of the syrup in a small bottle and compare it to a standard grading kit to establish the grade. 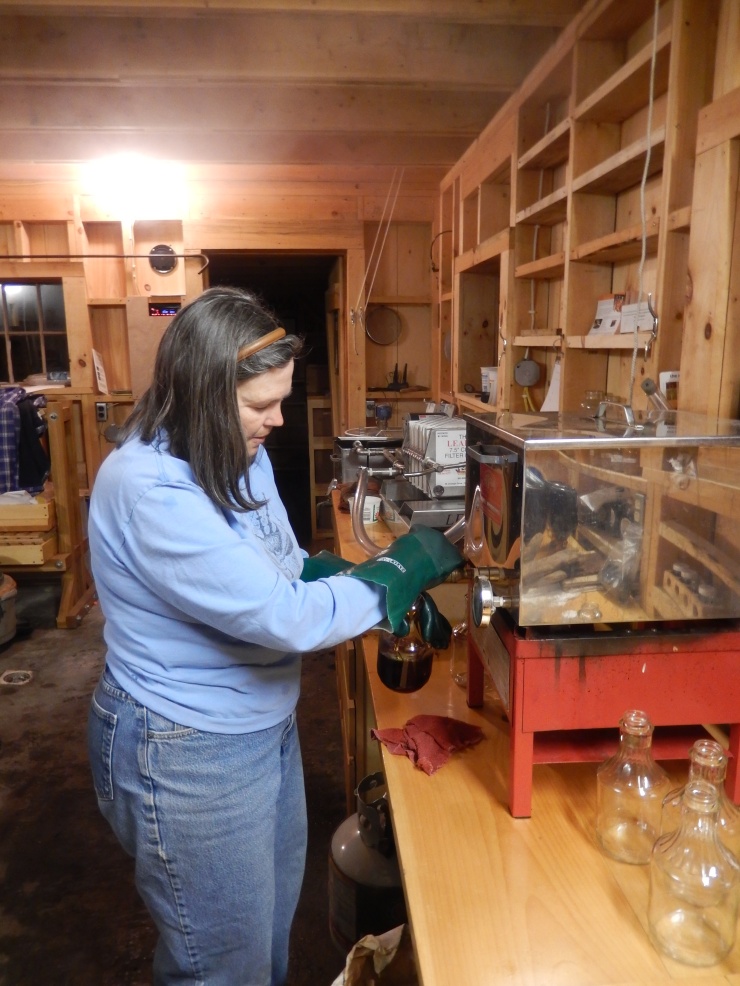 In Vermont there are four grades of syrup.  The grade contains both a color and taste descriptor.  We usually start the season out with Golden-Delicate meaning the syrup has a golden color and a delicate taste.  As the season progresses, the color of the syrup generally darkens and the syrup develops a stronger maple flavor, resulting in grades of Amber-Rich, then Dark-Robust and finally Very Dark-Strong. 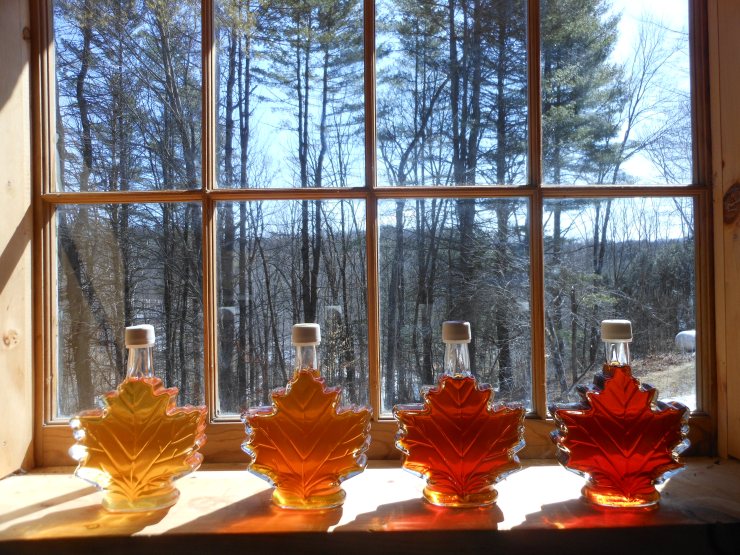 After grading, the syrup is heated to about 190 degrees and then bottled. 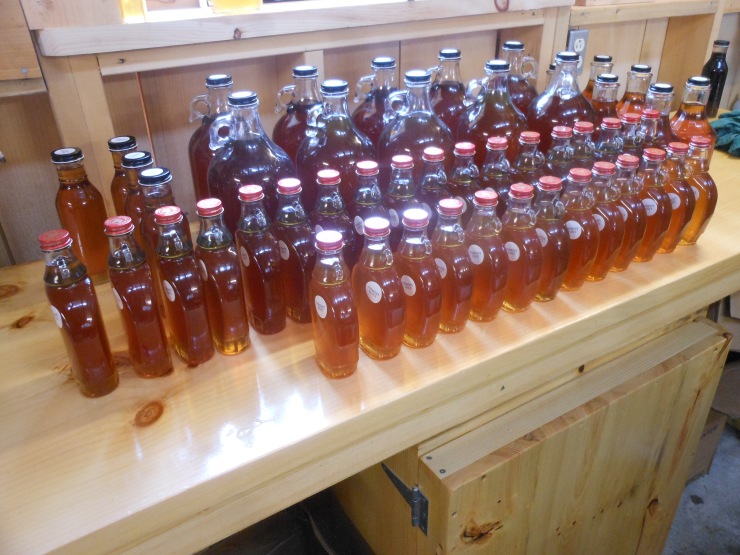 During sugaring we spend a lot of time in the sugarhouse watching sap boil.  This does not mean that things are boring.  Neighbors drop in to help, there is always food to eat, and the smell of the steam coming off the boiling sap is intoxicating. 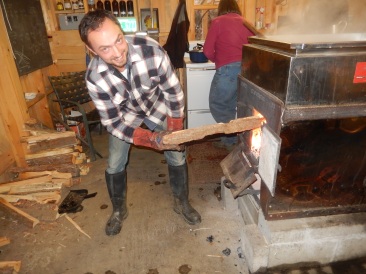 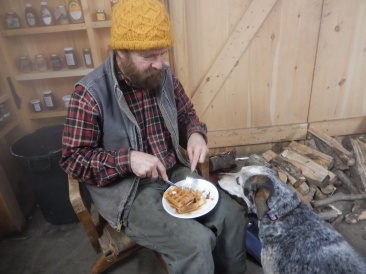 Nobody can resist the taste of pure Vermont maple syrup. 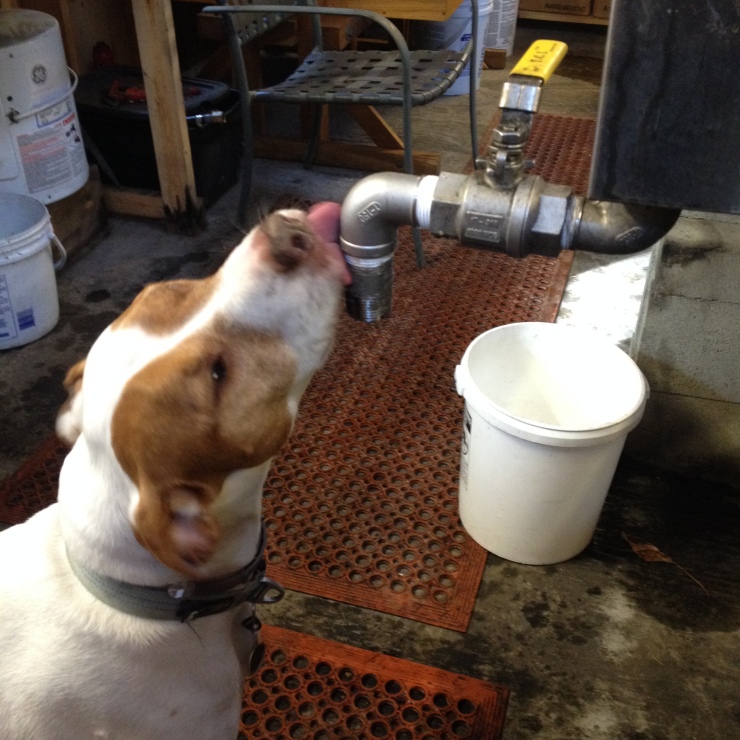 There is always time for a quick nap as long as the temperature alarms are set and someone else is watching the arch. 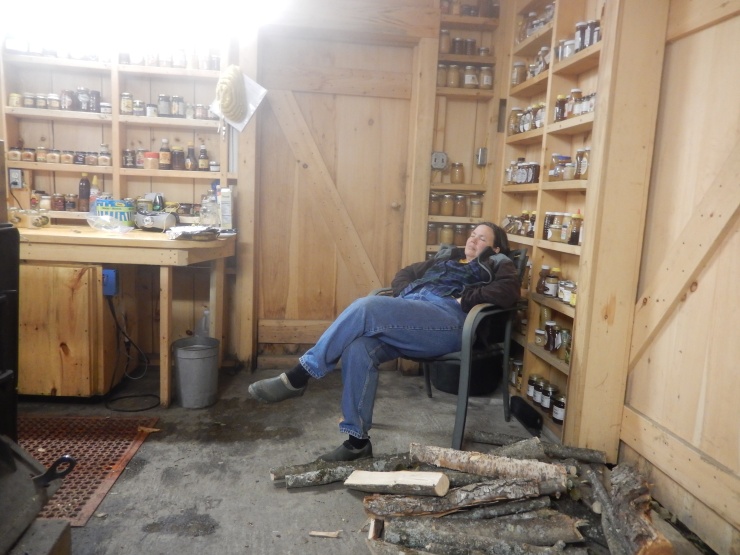 When the buds on the maple start to swell and open up the syrup starts to develop a very off-putting flavor and the boiling is over.

This does not mean that the work of sugaring is over.  Tubing needs to be taken down and cleaned.  Taps need to be removed from the trees and the the buckets need to be cleaned, dried and stored for use during the following season. 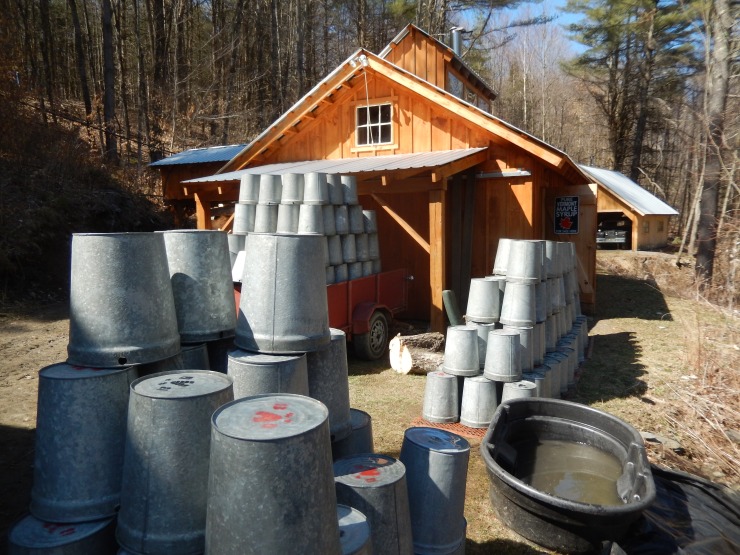 The pans and arch also need to be cleaned and the endless search for the many cords of firewood that need to be cut and seasoned before next year’s season can begin. 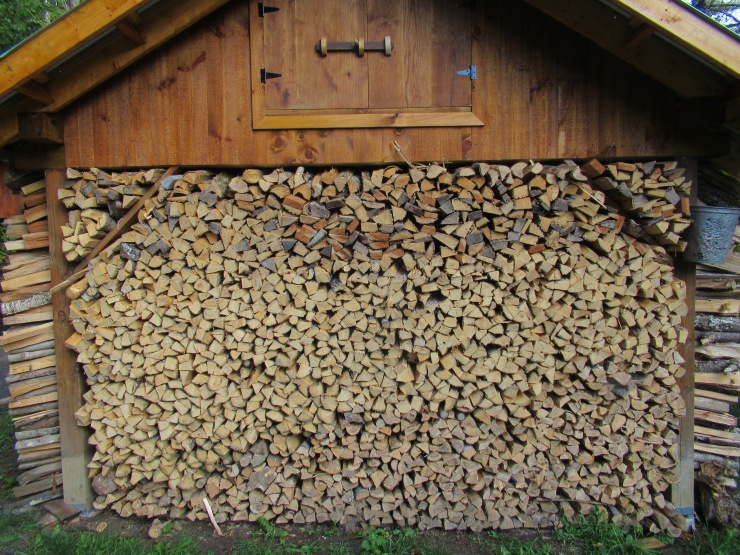 What you have just read can only really give you a vague appreciation for sugaring.  In order to really see what goes on come to our open house which takes place during the VMSMA Maple Open House Week which takes place in March.