September and October is Cider time in Central Vermont.

Towards the end of September we get ready to collect the apples that weigh down the branches of the trees in our neighborhood. 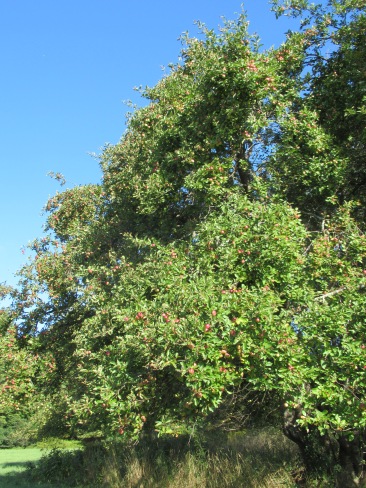 The first task is check out the trees to see how they have produced over the spring and summer.  To make a really good flavorful cider we combine apples from about 30 different trees.

For the most part, the specific varieties growing on these trees are unknown.  Some trees were intentionally planted many years ago while others are clearly wild. 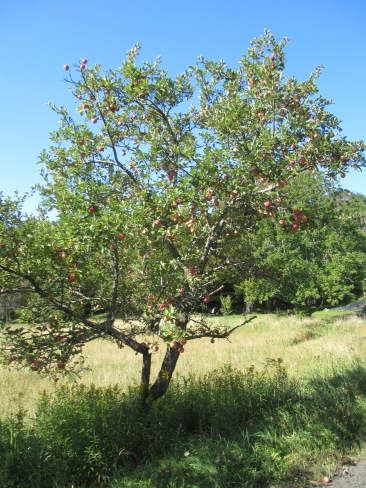 Though there are often significant differences in the size and color of the apples on the trees the most important distinction is the taste, and to assess that, apples must be sampled. 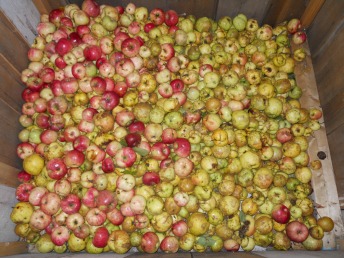 Once we determine that the apples from a particular tree belong in our cider we get to work on collection by spreading large tarps under the tree so we can be sure that none of the apples that make it through the scratter and press have touched the ground.    To get the apples off the tree and onto the tarp we climb into the upper branches of the tree and shake the boughs that have fruit.  For those working below a bike helmet comes in handy. 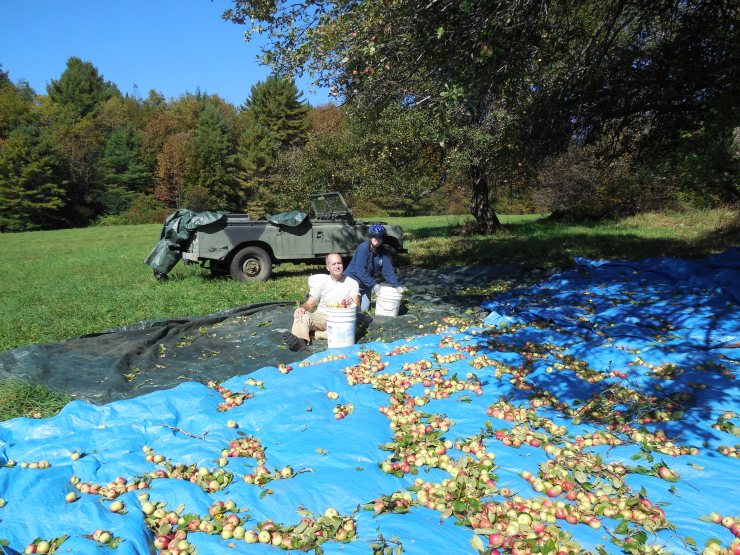 The apples fall to the tarp where they can be quickly gathered up and put into apple storage boxes and transported back to a shed for sweating.

Forks on the front of the tractor make it easy to maneuver the boxes in a shed where they will sit for 10 days to 2 weeks so “sweat.”  This sweating causes the apples to develop the sugars that make delicious cider.  Boxes full of apples weigh a lot and though the chances of someone coming to take the apples is non-existent, sometimes it is helpful to have a guard.

Things really get busy when it is time to press.  The first step is to make sure that all the equipment we use in the process is cleaned and sanitized.  Once that is done, the apples are mixed together in a washing tank.

From there, they go into a “scratter” that chops them into relatively small pieces which are then put through a grinder which creates a “pomace” ready for the presses.

We used to cut the apples by hand before putting them through a grinder but found it too risky.

Our cider presses are all home-made out of white oak, a wood known for its strength and durability.  The press consists of top and bottom plates made of oak.  A wooden box sits on the bottom plate,.  The wooden box has a hole in the front through which the cider can flow. 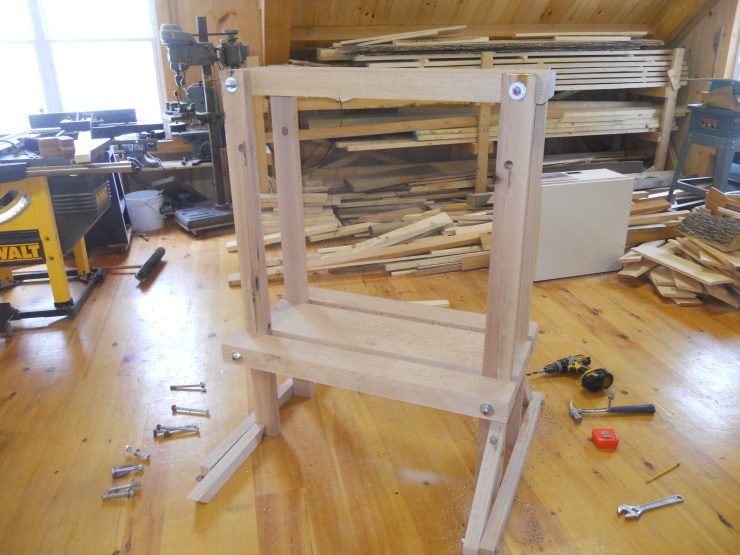 When the jack is engaged the top presses up on a steel plate that is screwed onto the bottom of the top piece of white oak.  Raising and lowering the jack’s handle exerts the pressure that causes the juice to flow from the cheese, into the box, out of the hole and into 5 gallon pails.

When a 5 gallon pail is full it is emptied into a bottling bucket which is used to put the cider into 1 gallon or 1/2 gallon jugs.  From there, the jugs go into the refrigerator for immediate sale or into the freezer where they will keep their flavor for about a year.

We turn some of our cider into a traditional New England product called “Boiled Cider” also known as apple cider syrup.  This is done by putting our fresh cider through the same process we use to make maple syrup in the late winter and early spring.

Boiling cider can be a bit tricky as the sugar content is so much higher to start with and there is a large amount of particulate matter. 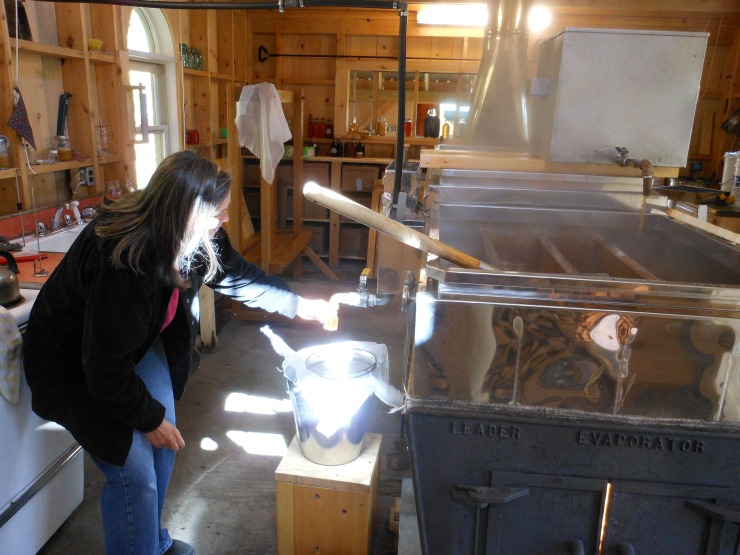 Despite the problems it is worth the effort.  It utilizes equipment that would otherwise be idle and there is something very pleasant about boiling during the height of the beautiful Vermont foliage season. 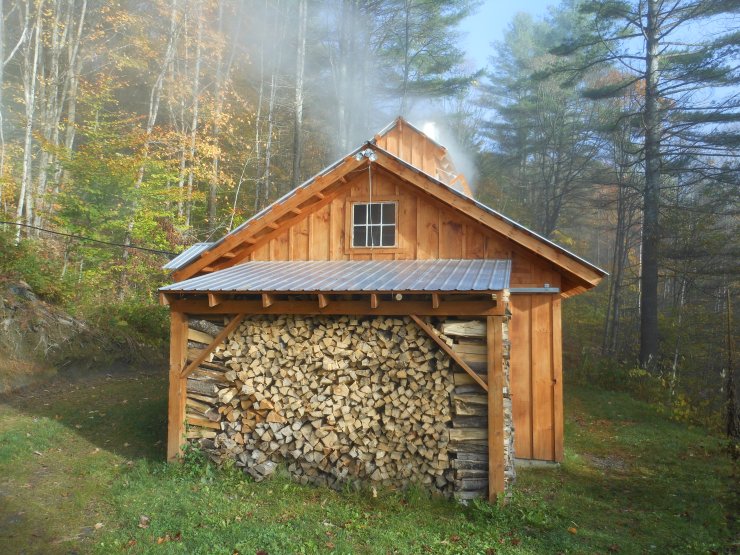 The result is a syrup that has the same sugar content as maple syrup but has a very strong apple flavor.  It is perfect for marinades, sauces and dressings.  It can also be used to boost the apple flavor of an apple pie.

Cider syrup pairs well with pumpkin so look in your favorite cookbook or on-line for pumpkin pancake or waffle recipes and serve with apple cider syrup! A few tablespoons of  Boiled cider will also increase the flavor of apple pie, apple crisp and other apple recipes.

Combine and use on salmon, chicken or pork

Preheat oven to 400 degrees.  Cut squash in half vertically, peel, scoop out seeds and cut the squash into 2 inch squares or leave in halves.  Rub flesh side with butter and sprinkle with salt and pepper.  Put on baking sheet and bake until flesh is easily pierced with fork, about an hour.  Drizzle with cider syrup towards end of cooking and serve warm or hot.

This is recommended for marinating pork spareribs and poultry, to flavor and tenderize the meat before it goes on the grill. 1 cup sweet cider, 2 tablespoons soy sauce, 2 tablespoons maple syrup (or boiled cider), ½ teaspoon dried mustard.    Salt and freshly ground black pepper to taste.  Mix together all the ingredients in a bowl that is large enough to accommodate the meat. Marinate the meat for at least 1 hour before barbecuing, or refrigerate over night. Before grilling the meat, be sure to wipe off any excess marinade, since substances like soy sauce will burn readily at the temperature needed for grilling. Yield: 1 ½ cups

Sauce:  Whisk together cider syrup, cream, and mustard and reduce to about 2 cups over medium high heat or until thick.  Add seasonings

Chicken:  Preheat oven to 200 degrees.  Dredge chicken in flour and shake off excess.  Heat 6 Tb butter in skillet.  Add chicken and sauté on one side over medium heat for 5 minutes.  Turn and sauté 3-5 minutes until done.  Keep warm in oven.  Add 2 Tb of butter to the same pan.  Saute apples 3-5 min until tender and put on chicken. Pour off excess butter.  Add cream sauce and heat.  Pour over chicken and apples and serve!

Crust for one crust pie

Line a 9 inch pie plate with pastry and freeze.  Preheat oven to 350 degrees.
Gently warm cider syrup, maple syrup and butter in a small saucepan just until butter melts.  Transfer to a large bowl and cool slightly.  Whisk in egg yolks and salt.

Pour filling into chilled crust and bake on center rack 40 minutes until top brown and wobbles only slightly.  Cool on rack and dust with nutmeg.  Serve warm or cold.

Lightly grease an 8×8 pan and line with parchment paper.  Combine cream, corn syrup, sugar, butter, boiled cider in a heavy 4Qt saucepan.  Heat to dissolve sugar then cook without stirring on medium high heat until 245-248 degrees (depending on how hard you like your caramel).  Remove from heat, add salt and spices and pour into pan.  Let sit for 12-18 hours, then cut into one inch squares and wrap with parchment paper.

For caramel sauce, halve ingredients and cook to 226 or so, making 1 ¾ cups sauce.  Refrigerate if not using within a few days

Beat together sugar and butter until fluffy, 4-6 minutes.  Add eggs one at a time beating 1 minute after each. Mix flour, salt, baking soda, baking powder cinnamon and nutmeg.  Add buttermilk, boiled cider, and vanilla to butter mixture. Add flour mixture and combine just until softened. Pat dough into ¾ inch thickness on floured surface and freeze for 10 minutes. Cut into shapes.  Heat oil to 370 degrees and cook shapes 1 minute on each side.  Sprinkle with cinnamon or confection sugar.